“I remember the first time I walked into Cigar City Club I just thought to myself, what a classy, upscale place which had a 1920’s type of feel.”

Perhaps it was her innate sense of never missing an opportunity to connect with others that led Jaqueline Waller to her first visit to Cigar City Club (CCC).  After witnessing a crowd of people outside the establishment, she took a pause from her errands and walked right into what turned out to be the club’s pre-grand opening.  Jaqueline enjoyed cigars and had friends who also engaged in the lifestyle; therefore, it was no surprise for her to run into familiar faces participating in the celebration.  She may have stayed in the club no more than five minutes that day as she was underdressed; but that didn’t deter her from future visits to explore this new venue.  Jacqueline quickly became a frequent patron of CCC and decided it “just made sense” to become a member and reap the benefits of having a locker to store her preferred cigars and wine.  You will usually find Jacqueline sitting around the CCC bar with friends.  She prefers to visit the club on slower, quieter nights where she can really engage with other people.  An additional appeal is having a place to sit, relax and smoke a cigar while being intermingled with a grown and sexy crowd.  Most importantly, she finds CCC to be a great space for networking with successful people and making valuable connections.

As a former distributor to Amway Global, Jacqueline learned how to effectively network and connect as an extension of her natural abilities.  One day, in an effort to do something fun and creative for a friend’s birthday, she developed the idea to start a company that would provide free and affordable options for entertainment as an alternative to clubs and restaurants.  This became her business – CleanFreeFun, LLC that specialized in assisting other businesses with marketing their free and affordable events around Atlanta.  Jacqueline was able to drive heavy traffic to the then CleanFreeFun website and had a successful partnership with Chastain Park that provided free concert tickets and giveaways to participants.  Although the website had a huge following, she experienced difficulties with the site development and it just did not generate the desired revenue.  Jacqueline then moved her focus to a networking group she created on Facebook known as Connecting in Atlanta which grew exponentially!  In 2015, she turned away from solely hosting group networking events and began to provide business education with various speakers in tandem.  This venture led Jacqueline to form her current business known as Connecting Atlanta which provides a variety of business focused workshops and speaker engagements to a thriving Atlanta network.  Connecting Atlanta is in the process of launching a new subscription based website that also provides sales funnels acquired from their workshops.  This new service benefits owners that are looking to expand, grow revenue and sustain their companies with exclusive access to business leaders on-line and through up close and personal events.  It also enables business owners and experts that want access to Connecting Atlanta’s network to present at these events; Connecting Atlanta will provide the location, marketing and the crowd to ensure it is a successful one!  To learn more and participate in upcoming workshops, visit Connecting Atlanta’s website .  In April, be sure to RSVP to the event below, she would love to see you there! 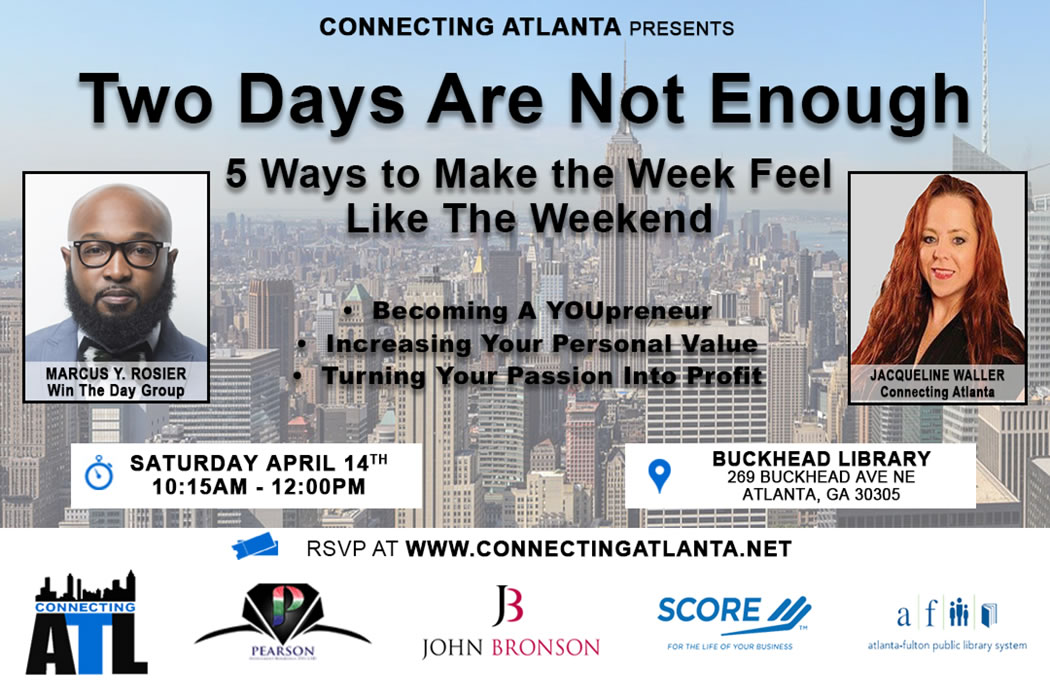 As a public health precaution due to COVID-19, we are temporarily closed.